I was driving across the Golden Gate Bridge and saw the pickup in front of me swerve into oncoming traffic. That was when it became obvious this guy was not right. As we crossed the bridge, I was on the phone to 9-1-1 when he rear ended another car. I followed the pickup through the toll booths and through the tunnel. He knew I was following him but couldn’t get away. He took that first right turn, and then another, into a dead end. I angled my RAV to block his exit, and then got out of my car to be able to run if he had a gun. He turned around and rammed my vehicle. As the police arrived, he jumped out and ran, giggling and acting very strange. I didn’t want to take him down for liability reasons, but he was clearly not going to get away. He ran headlong into the sticky bushes, where the police arrested him. His blood alcohol was three times the limit. His insurance company, once they saw these pictures, paid up quickly.

1. He has hit that white car at this moment.
2. Blowing through the toll booths.
3, 4. He is cornered.
5. He is now ramming my car.
6. He has now fallen painfully into the sticky bushes, but still giggling and acting strange.
7. San Francisco’s finest effecting an arrest. 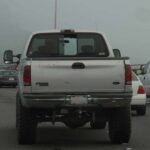 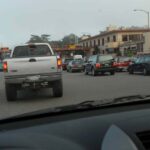 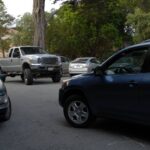 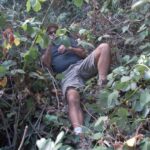 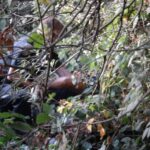