This was supposed to be just another election, but it turned out to be a revolution, sort of. The incumbent was President Kuchman, who was not running. Victor Yanukovych was his heir apparent, challenged by pro-West Victor Yushchenko. I was stationed in Kiev, responsible for observing the entire electoral process over a few months leading up to the election. Note that on this mission we were observing, not supervising, an election. Things started slowly, visiting lots of people associated with the election, including politicians, non-profit organizations, and so on. As the election neared, the fraud and trickery increased. I could write a book on all the strange and amazing things I got to see and be involved in, but for now, the short story. Massive fraud resulted in a stand-off, the opposition camping out in the middle of Kiev, and a run-off election in which Yushchenko won. Here are a few of the hundreds of pictures taken.

Disclaimer: I’m trying hard to present this event impartially. Please do not think I am promoting one side or the other. I did have greater access to Yushchenko’s campaign, mostly because they were courting our favor. That is why there are more pictures of their campaign than Yanukovych’s campaign. If you have more specific information on any of these individuals or events, please let me know.

1. Police officer taking a bribe. Yushchenko closed this entire agency because of the ongoing corruption.
2. This photo was taken on a weekend in the center of Kiev. A guy standing a meter to my side also took a picture of the dancer. That picture ended up in The Economist.
3. The Communist Party candidate.
4. Opposition politicians inspect these men, who allegedly were plain clothed police, and had assaulted the opposition’s rally.
5. That’s Yushchenko and his guys confronting the head of the police.
6. I attended many of these press conferences in the electoral season.
7. A Communist Party rally.
8. After the initial voting, when fraud was alleged, there was a lot of protests and political maneuvering. This was in Lviv.
9. Supporters of both candidates were jammed together in front of the Supreme Court shortly after the initial vote and the Court was deciding about the legality of the vote. This day was remarkable in that, given the high stakes of fraud, there was no violence.
10. The protests and rallys in Kiev.
11. A police line at the Presidential Palace. Note the opposition had put the orange balloons on the wall.
12. Protesters camping in central Kiev.
13. Someone put a flaming object in a ballot box trying to destroy votes.
14. This is Yuschenko shortly afater he was poisoned.
15. This is Yushchenko shortly before he was poisoned.
16. Yushchenko’s personal photographer and I got to know each other, and he took this picture of me. 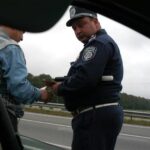 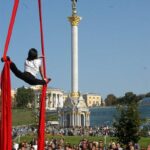 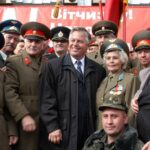 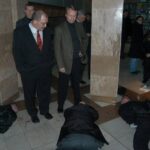 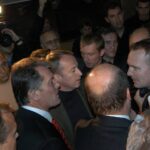 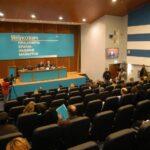 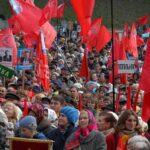 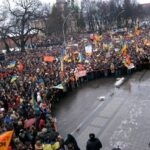 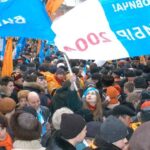 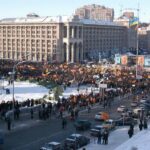 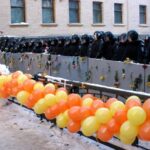 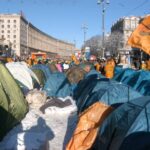 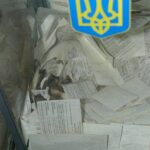 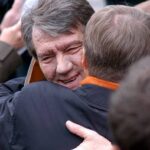 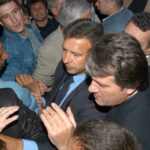 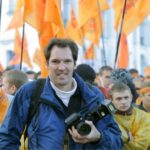