I was on a flight from Singapore to Jakarta on a 747 with four passengers, myself and three BBC war correspondents. Things were surprisingly calm as the taxi took me through the burned out center of the city, and I entered the hotel as their only guest. A major demonstration had been called for the following day, and massive violence was expected. The next morning, every intersection was blocked with soldiers and tanks, but the streets were empty. I walked all over the town that day, moving through the lines of soldiers who did nothing to stop me. They were actually quite polite and seemed relieved that nothing was happening.

The Indonesian parliament area was the center of the world’s attention that week, because students had stormed the grounds, on which were still 200 troops. There were round-the-clock speeches and a tense stand-off between the student protesters and the soldiers, who did not know which way the political winds were blowing and did not want to make a bloody mistake.

I walked around the famous domes Parliament building, which was all closed. The soldiers had told the students that they could do their protests on the grounds, but they were not to enter the buildings. In the back, I found a doorway with three students resting. Was the door open? No, they said. With a slight push I found that it was in fact unlocked. I walked in, followed by the three students. We wandered into the Parliament chambers, which were cool and dark, completely untouched. It was amazing to be in the center of the government in the midst of a revolution, just the four of us. They walked onto the podium and sat down in President Suharto’s and Habibi’s seats and mocked their leaders.

Just as we were to leave, a few other students entered, walked to the front doors, and flung them open. There were thousands of people outside, and these protests  were the main story of the world on that day. When they saw the Parliament doors open, hundreds rushed in and chaos ensued. There was a lot of dancing and singing, and furniture was thrown about. After 40 minutes, someone that seemed to be a student leader started screaming in Indonesian. It seems that their agreement with the soldiers had been broken, and this was a life and death matter. Everyone withdrew from the chambers.

From there I returned to the Presidential Palace, where an Indonesian news crew spotted me. With their camera already running, they asked if they could interview me. Well, apparently they already where. They asked how the soldiers were behaving, and I said they were just standing around, and were polite to me. Little did I know this clip would be used by the government for propaganda.

That night, back at the hotel, CNNs headline story of the day was that the Indonesian students had stormed the Parliament chambers, “…an act that just days before would have been unthinkable…”. Well, it didn’t quite happen like that, but close enough. Then on the Indonesian national channel, the government was trying to convince everyone that things were calm and the soldiers had a lid on the riots. They then ran my interview, stating “Even Professor Long of American confirmed that all was calm and the soldiers were doing their job well…”.

The next day I was walking from my hotel to the Presidential Palace when a motorcade blew by, almost running me down (I had developed a bad habit of walking down the middle of these empty streets). It was Habibi, and within the hour he was sworn in as President.

Ironically, after seeing these Indonesians of all walks of life struggle for a better nation, the next summer I was working for the UN in East Timor, where the Indonesian’s were the culprits of genocide, and the Timorese were the victims. After that assignment, I was in New York at the UN headquarters. In the gift shop were UN teddy bears, with a label marked “Made in Indonesia”.

What is the point of all this? Social justice, democracy and human rights are highly complex, and it is never clear who is good and who is bad, if in fact anyone can be labeled as such. Also, world events are made by average people, sometimes doing extraordinary things, but sometimes just doing what they have to to get by. 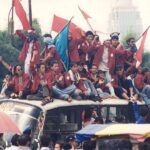 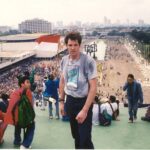 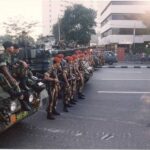 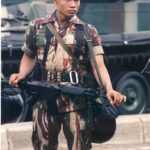