This was the toughest of the 35+ marathons I’ve ever done, even harder than an Ironman in some ways. You can pick one of two strategies. Carry extra clothing for up high when it gets cold, but you need to carry that clothing the whole way. You cannot stash it or dump it. Or you can dress light and freeze your butt off in the upper parts. I brought only a windbreaker. The weather was so horrible this year, the half marathon the previous day was cancelled due to snow and whiteout. On this day, the rain and snow started a couple hours into the race and dumped all that snow you can see in the pictures. Yes, all that snow fell while we were running. The rule of the trail is that you defer to those coming down, ie faster runners. Between that and the normal traffic jam, much of the race in the upper switchbacks was spent standing in place, shivering.

The top was the half way point, and it took me longer to do the half than I took in the slowest of my other marathons. Coming down was less standing in the cold, but more concern about not tripping and spraining an ankle. The race too over eight hours for me. Chatting up my Mom, who came for the ride, was young bride from Texan scared that something happened to her guy. He never takes this long. No, not to worry. The race is super well organized and there’s lots of safety resources on the mountain. 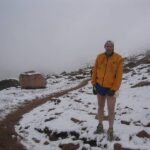 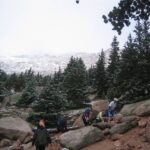 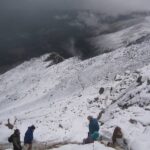 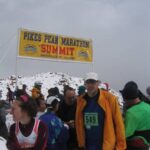 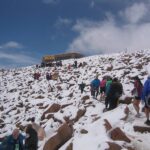